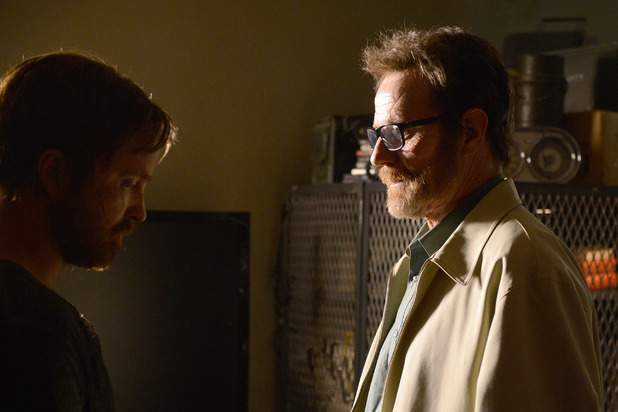 On Sunday, the Breaking Bad finale aired. I mostly liked it a hell of a lot, though I thought Walt’s revenge gambit was too heavily weighted in his favor, rendering the episode more morally simplistic than I had come to expect from the show. Opinions!

I started thinking about this after reading an article by Tim Goodman, where he lays out his personal choices for the drama pantheon. It strikes me as a terrific encapsulation of a line of thinking I’ve heard all across the internet (excuse me while I generalize a bunch of nameless people’s opinions!). And it makes sense. The Sopranos, The Wire, Mad Men, Breaking Bad. Two HBO shows. Two AMC shows. The Sopranos and Mad Men (created by a Sopranos writer) strode onto the scene and singlehandedly made their networks’ reputations. The Wire and Breaking Bad debuted more quietly but gradually built up steam to the point where they could stand proudly next to their more buzzed-about sibling shows. This comparison basically falls apart considering that Breaking Bad has become a hugely popular, Best Drama Emmy-winning show and The Wire was never that, but I’ve heard “The best-show-of-all-time prize is between Breaking Bad and The Wire” said too often to not think that this parallel hasn’t taken hold in some people’s minds. Generalizations! I love all four shows to bits. It fits together neatly. Tidily. It’s also really boring.

That being said, the only thing that truly bothers me in that article is the idea that Deadwood not having a proper ending somehow disqualifies it from the pantheon. I’ve heard that said many times and I will never, ever get it. Deadwood is amazing. All the episodes we have of it are amazing. By its very nature it is not a show that needs an ending to be supremely wonderful, much as I wish we had more of it. It should be there. God.

So, yeah, boring. It’s not surprising that the vast majority of discussion surrounding the greatest-of-all-time question has been centered on these shows since the internet is nothing if not focused on the now (we’re all pretty young), but it’s discouraging all the same. The idea that the best shows of all time must be cable shows, must have aired after 1998, and must feature a white male antihero just strikes me as so very limiting. I am not the one to extensively write about this as I honestly haven’t watched all that much pre-2000s television, but that sort of illustrates what I’m trying to get at. There’s so much out there. For instance I can only assume there’s a REASON Hill Street Blues is fondly remembered both for its writing and also for changing television drama forever. Disqualifying it because the characters can’t say “shit” and declaring (for example) The Wire the be-all-and-end-all of all television honestly does that show a disservice. It suffocates it, traps it in a room by itself, reduces it to homework. There’s too much television in the world to not be adventurous. Call The X-Files or The Rockford Files the best drama ever! Why the fuck not? Look at this year’s crop of new dramas and marvel at the fact that they manage to be great despite their somewhat lighter tones and female protagonists! There are so many different colors to paint with. (So what I’m saying is that everyone should be as open-minded as me. As I’m the best.)

Oh yeah, this dissertation is sort of about Breaking Bad. In any case, all the arguing I’ve seen on the internet tonight illustrates my problem with immediately trying to slot/exclude shows into/from the drama pantheon. If someone declares Breaking Bad to be the best series ever made, then someone else wants to say that it’s a very good show but it isn’t. If that someone else says as much, then that first someone will just reiterate their own, firmly held opinion. It’s the problem that inherently comes with ballying about opinions on the internet (he disagrees with me! he must have some secret, spurious motivation for holding that opinion!), taken to its most ridiculous, dead-end extreme because there’s no real room for leeway between the two positions. The problem isn’t that certain shows always get thrown into that drama pantheon. I hope people watch and rewatch Breaking Bad and The Wire and The Sopranos forever. The problem is the pantheon. In some sense I wish we could just appreciate the Breaking Bad that was and is without needing to categorize. It’s just kind of stifling. – Nathaniel Pettengill [author image=”http://i14.photobucket.com/albums/a310/flibber/Screenshot2013-10-02at14612PM_zps8a917a2f.png” ]Nathaniel became interested in movies upon watching the Beautiful Mind Oscars in 2002 and wondering what all of that was about. He got into television a few years later when his sister introduced him to Firefly. He is now trapped on his bed, covered by accumulated food crumbs and a laptop on which he constantly watches films and TV episodes and surfs the internet. Help him before he’s too far gone. [/author]

2020 Oscars: That ‘Parasite’ win plus stats and trivia of the 92nd Academy Awards