“She is the best part of the series,” I said out loud as I watched Michelle Krusiec’s Anna May Wong give her heartfelt Oscar acceptance speech in Netflix’s ‘Hollywood.’ In Ryan Murphy’s reimagined classic Hollywood, people of color take center stage and Anna May Wong receives the award she never got in real life. In every scene, Michelle Krusiec sets out to make Anna May Wong bigger than life. “She was not a wallflower and I love that,” said Krusiec, who did a deep dive into the life of Anna May Wong for her role. “She was ambitious, and assertive, and vocal….I really fell in love with her vitality and her desire to be more.” Krusiec gave a poignant performance, especially in the tear-inducing audition takes of Anna May Wong for ‘The Good Earth.’

Upon telling people who she was playing in ‘Hollywood,’ Krusiec was shocked that many did not know who Anna May Wong was. She saw this as a common problem for Asian Americans: “We’re just not seen; historically, we are constantly omitted, taken away, erased, whitewashed, pushed to the side, put to the back in a way that people don’t actually recognize.” Krusiec has faced similar barriers as Anna May Wong. She said, “The bamboo ceiling is very real. For myself, having been in the industry for over 20 years now, I realized that it’s still the same systems in place. The same templates that existed then are still in existence now.”

Michelle Krusiec knows first hand what it feels like to push against a powerful system stacked against Asian Americans. She tried unsuccessfully to change the name of the character “Ching-Chong” she played in Dumb and Dumberer (2003). Krusiec recalled, “When I was cast, I was so excited to be a part of it. I knew there was such a stereotypical name for that character and I thought that once I stepped into the role, I could talk to the director and say ‘hey, this name is so awful for us, can we just change it or explain why the two leads call me that so we can do some sort of education around it?’ and he just was not interested. The messaging was ‘Just get over it.’ I was saddened and shocked to discover that they just didn’t care. It was very difficult to be the victim of that.”

Like Anna May Wong, who was disillusioned with the stereotypes and barriers within the Hollywood studio system and went abroad for opportunities, Michelle Krusiec turned to the independent Asian American film world. In 2004, she starred in ‘Saving Face,’ directed by Alice Wu, for which she received a Golden Horse nomination for Best Actress, Taiwan’s top film award. ‘Saving Face’ won the 2005 Golden Horse ‘Audience Choice Award’ and was a success amongst Asian and Asian American communities.

With her compelling performance of Anna May Wong under her belt, Michelle Krusiec is poised to break more barriers as a director. She shared, “I’m really excited and proud to be a part of the American Film Institute’s directing workshop for women…I really want to reframe the conversation so it’s about Anna May Wong, it’s about people of color, it’s about women. I think it’s important that we tell our stories now…So as a director, that’s what I’m interested in doing is telling those very specific stories that only we can tell, and we have to tell.”

From challenging the Hollywood system to giving Anna May Wong her triumphant due, Michelle Krusiec is a talent to watch. I look forward to seeing the future stories that only she can tell.

Nancy Wang Yuen is a sociologist and pop culture expert. She is the author of ‘Reel Inequality: Hollywood Actors and Racism’ and co-author of ‘Tokens on the Small Screen: Asian Americans and Pacific Islanders in Prime Time and Streaming Television.’ She has appeared on PBS, BBC World TV, Dr. Phil, New York Times, Washington Post and Los Angeles Times among others. She is a guest writer at Newsweek, Elle, HuffPost, and Self. 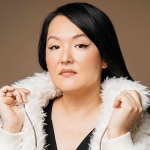 Interview: Jurnee Smollett on understanding Leti, working with Jonathan Majors in ‘Lovecraft Country’ and how she found out about her Emmy nomination [VIDEO]

Interview: Jurnee Smollett on understanding Leti, working with Jonathan Majors in ‘Lovecraft Country’ and how she found out about her Emmy nomination [VIDEO]