Girls, Boys, and They/Thems, welcome to another recap of television’s “RuPaul’s Drag Race!” Neither of us has had a “good” thought in fourteen entire days! C’mon, the bleak midwinter, let’s get sick’ning! (Being gay is exhausting and we would like to be put into a medically-induced coma).

My name is Daniel Trainor and, as a resident of the great state of California, I am legally not allowed to have seasonal affective disorder.

My name is Sam Stone, and this is a cry for help!

We’re here. We’re queer. We have a recap to write.

DT: The girls return to the Werk Room (LaLa holding the remnants of her bag look), where Joey Jay has left a lipstick message that reads “I’m a gay ass bitch.” A catchphrase queen to the bitter end.

SS: The great Kandy/Tamisha schism of last episode is not quite resolved, and we get to watch another little spat before the girls get out of drag. Listen, it’s good TV, but as a child of divorce, even a whiff of conflict makes my butthole clench.

SS: RuPaul enters the Werk Room looking like a character on “The Big Comfy Couch” (PBS hive, we’re eating tonight), to explain this week’s Mini Challenge. The girls will work in pairs to create dresses made of wallpaper.

DT: RuPaul makes a Charles Nelson Reilly joke and the queens laugh along as if they know who Charles Nelson Reilly is. The girls split off into their groups, with Elliott and Tamisha landing together. Elliott says that her partnership with Tamisha is “the bottom of the barrel,” which is gorgeous energy to be entering the challenge with.

SS: She said what she said!

DT: After last week’s sewing nightmares, LaLa and Symone team up, which feels like a recipe for disaster. And that recipe, I guess, is for pizza! After getting dragged for hot glueing paper bags to her bodysuit, it’s very brave of LaLa to take that to the next level in this week’s Mini Challenge by simply taping pieces of pizza to her tits.

SS: Drag is about taking risks.

DT: I thought it was cheesy.

SS: I’m sending a drone to murder you <3

DT: FINALLY! Rosé and Denali pair up and immediately start talking about how they are DANCERS and PERFORMERS and BETTER THAN YOU. Rosé makes a Sutton Foster joke, which I absolutely had on my Season 13 Bingo card.

SS: Drag is about being yourself, and embracing your flaws, and in that spirit I would like to publicly admit that I did go undergo the expensive trauma musical theatre school, and hearing a Sutton Foster joke on national television is one more thing on a growing list of things that are spiritually damaging for me.

DT: Despite Elliott standing in front of the wallpaper wall like she thought the challenge was to also act like wallpaper, she and Tamisha win the Mini Challenge. It feels a bit unwarranted, but congratulations on the home decor gift cards or whatever.

SS: I feel like drag queens are always looking to buy customized home decor. Thank God we can finally get these girls exactly what they’ve always wanted which, again, is customized…home…decor.

DT: For this week’s Maxi Challenge, the queens will be performing in various “disco-mentaries” (I love language!), in which they’re asked to tell the story of disco through dance. Some of the groups get a specific documentary subject like “Studio 54,” while others get “disco and sex.”

SS: As the girls prep for their choreography rehearsal, Ru flits around the Werk Room quizzing each girl on disco history. Since these girls have a median age of approximately 22, they all fail Ru’s pop quiz spectacularly, but no one more so than Tina who credited “I Will Survive” to Diana Ross instead of Gloria Gaynor.

DT: Ru asks Symone what she knows about disco and Symone says “I know there was a lot of movin’ and groovin’,” which is exactly what you’d say if you knew nothing about disco.

SS: Coincidentally, that is also how I responded in grade school when the other kids asked me if I knew how sex worked.

DT: Meanwhile, Ru asks Kandy about disco and she immediately starts talking about The Pussycat Dolls, which is how I responded in grade school when the other kids asked me if I knew how sex worked.

SS: It’s time for the girls to learn their choreography, and many of these girls couldn’t kick ball change to save a life, honey dear! Pas de beurré! I am in hell!

DT: Elliott and Tamisha have the “disco and sex” theme, so naturally they’ve been given hula hoops.

SS: Tamisha has difficulty using her hula hoop because of health struggles, and reveals that she’s been competing this entire season with an ostomy bag, which is an incredibly impressive feat!

DT: While working with the other groups, choreographer Miguel Zarate says Studio 54 was “confetti in a can,” but I thought it was more “cocaine on a toilet seat.” Whatever words of inspiration he’s able to muster are lost on Utica, who is flopping around this stage with a piece of fabric like a rhythmic gymnast after happy hour at Applebee’s.

SS: After Utica quite literally falls on her face like a vaudevillian clown, the girls retire to the Werk Room where Kandy and Tina quickly declare themselves the “Mean Girls” of the group. Everyone loves mean people, so I totally get it.

DT: Until we see otherwise, they’re more Gretchen and Karen than Regina and Cady. When it comes time to perform, it becomes evident that the Maxi Challenge is really all about the queens hitting a few choreographed dance moves, huh? Okay then.

SS: It turns out that this ask is a bit more than they many queens can give! Gottmik can’t even fake knowing the choreography, and instead of hitting her choreography, Utica makes clown faces.

DT: Rose and Denali are predictably solid. But it’s Olivia, who radiates enough joy and energy on stage to give these dancing powerhouses a run for their money, who finds herself at the top of the class.

SS: We should give honorable mention to LaLa Ri who is also more charismatic than she is an incredible dancer, but was a pleasure to watch nonetheless. As the entire group lets out a sigh of relief for stumbling through this choreography challenge, we move onto the final runway.

DT: The theme is Little Black Dress, and Tina kicks things off with a LBD that is little black, red and orange. Sometimes a signature isn’t exciting anymore when it’s predictable.

SS: Tina, baby girl, I am clinically exhausted of red and yellow! Gottmik, however, came through with another serve this week: a little black dress so tiny it covered approximately five square inches of her crotch. Maybe this was an obvious riff on the theme, but reader, I did gag, and Mik knew what she was doing.

DT: Kandy’s painted canvas dress is a cool idea, in theory, but looks like an oil spill in execution. Elliott and Tamisha, teammates from earlier in the day, are in sync again as they have both made the brave decision to take the challenge VERY LITERALLY by wearing the most boring little black dresses you’ve ever seen. They make Gottmik’s risk-taking that much more welcome.

SS: Symone arrives in a look that, once again, makes a bunch of clever references — this time to Ru, and Utica enters the runway looking like a gold-skinned Audrey Hepburn from outer space. She later explains that she’s dressed as an earring to which we say…ok!

DT: Olivia’s dress looks like something you could buy for $19.99 at Dress Barn, but again, she mostly makes it work by radiating unfiltered joy, and wearing a fun wig. Sometimes that’s all you need!

SS: Rosé’s look is essentially a tight black dress, onto which she’s sewn a ring of tulle which, unfortunately gives her the silhouette of a Pop-Tart.

DT: When it comes time for judging, Gottmik and Symone are somewhat surprisingly safe. Gottmik’s look did not scream “safe!” to me. It screamed “love me or hate me!” and I expected her to be either in the top or bottom, depending on what side of the bed Michelle woke up on.

SS: Olivia, Tina, and Elliott are our top three queens this week, but Olivia’s undeniable charm, overwhelming charisma, and powerful wigs win the day. She’s this week’s top queen, and we’re treated to a patented Olivia Lux thousand-watt smile as she exits the mainstage.

DT: On the flip side, it’s Kandy, Tamisha and Utica in the bottom. And in a reality television twist that nobody could have foreseen, rivals Kandy and Tamisha have to lip sync against each other to avoid elimination.

SS: It’s a very evenly matched lip sync, made even more tense because we know Tamisha is giving this caliber of performance despite her health issues. In the end, Kandy will not be denied, and she lives to fight another day.

DT: Sadly, the run of icon, legend, mother, friend, sister Tamisha Iman comes to an end, but not before she further cemented her legacy as one of the best to ever do it.

SS: Luckily, Tamisha will have her thousands of dollars in…customizable home…decor to remember her time on Drag Race. 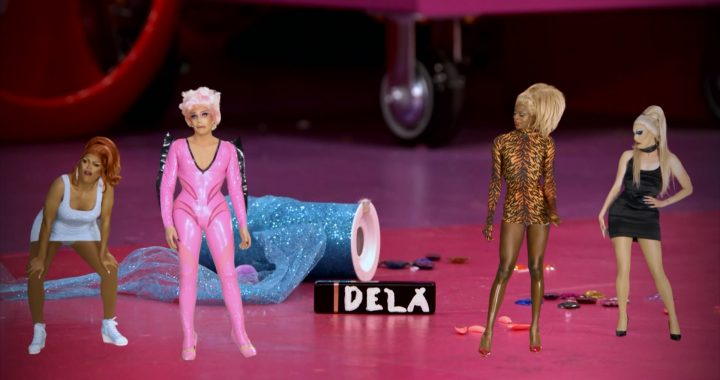