Slave to Sirens only exists at nightfall. When the sun dips over the horizon, Lebanon’s first all-woman metal band emerges from their daytime existence to headbang long into the night. Embedded amongst the ornate architecture of Lebanon’s rich history and Beruit’s conservative society and economic hardship, the young women of Slave to Sirens rely on thrash metal music-making as a means of artistic expression. Director Rita Baghdadi’s third documentary feature is a behind the scenes look at the band’s navigation of Lebanon’s music scene and an ode to the sisterhood that is created through a sense of musical belonging.

Slave to Sirens’ founders and guitarists Lilas Mayassi and Shery Bechara are at the core of Sirens; they are the documentary’s main voices and grant vulnerable insight into their relationship, history together, and the band’s roots. Joining Lilas and Shery, vocalist Maya Khairallah, bassist Alma Doumani, and drummer Tatyana Boughaba are the additional band members mainly existing in the film’s peripherals but whose belting vocals still resonate loudly.

Baghdadi’s handheld camera becomes like a confidant to the group, joining the band’s meetings, rehearsals, and performances where it is clear this group are more like a family than colleagues. Just like a family, one moment they can all effortlessly harmonise on the same note and the next they are like five different instruments all fighting for the solo. They are all, however, united by this very unique sense of belonging; to be the first and only all-woman thrash metal band in the Middle East.

While they find freedom in their makeshift bedroom writing rooms and recording studios, in the background murmurs of conservative values seep onto the streets of Lebanon. Baghdadi flags these notions subtly: debates on Article 534, a law that sees sexual relations that “contradict the laws of nature” to be punishable for a year in prison, can be heard on the airwaves between the band’s conversations. These small but gradually multiplying signs of political unrest begin to populate Sirens; threats of violence build like a ticking time bomb, mounting in tension until fear is like a constant ringing in the ears of the bandmembers.

In just under eighty minutes, editor Grace Zahrah makes swift work of stitching Sirens with social commentary weaving into the band’s internal conflicts, which there are a lot of! Zahrah lays sequences of visual symbolism side by side so that Slave to Sirens are embedded amongst the unfolding social climate; swirling cigarette smoke wafts around Slave to Sirens sat in a bar then a black plume of smoke curdles in the sky as Beruit’s August 2020 explosion leaves devastation in its wake. The chants of revolution begin to replace Lebanon’s silence, joining them Slave to Sirens’ guitar riffs and vocal screaming ignites the night’s silence with noise.

One subtly spectacular sequence shows Lilas and Shery, after a late night of heavy partying, catching up over a pastry on a residential street. Shoulders pressed together as they gaze down at their phones scrolling through pictures that capture hazy memories, the street slowly becomes flooded with marching protesters crying: “The people demand the fall of the regime.” The sudden swarm is a fantastic visual captured by Baghdadi’s gritty lens. The ground feels like cracking eggshells, tempers flaring but all the while Baghdadi’s camera trains on the band trying to make their way amongst the social upheaval and cultural devastation.

Surrounded by tumultuous circumstances – secret lesbian romances and debates over song lyrics – this closely formed sisterhood have their roots tangled, whether they like it or not. Not only are Slave to Sirens showcased in the documentary, but the talent of Baghdadi – director, producer and cinematographer – also shines through. She captures these young women in frames that flit between more naturalistic guerilla style and an orchestrated, composed shot, the contrast often reflective of the band’s wild dissonance or harmony.

For a documentary focused on musicians, it is rare Slave to Sirens are actually seen on stage. Sirens is more interested in the group’s offstage thoughts and Baghdadi understands the power of presenting the band as young women who aren’t confined to this singular musical existence. After rehearsal and before the sunsets, all five of them must still traverse daily life where they don’t have bass guitars like wielded weapons and can’t scream like a battle cry.

Sirens is a portrait of bold musicians at just the start of their career who are already making impressive waves. Baghdadi’s all-access pass delves into the passionate and emotional journey of these band members and their fierce prevailing commitment to their thrash metal vision.

This review is from the 2022 Sundance Film Festival. Image courtesy of Sundance Institute | Rita Baghdadi. 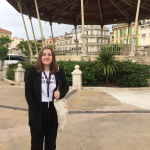