Céline Sciamma has a tradition with names. Water Lilies‘ Marie, Girlhood‘s Marieme, and Portrait of a Lady on Fire‘s Marianne all share variants of the name Marie, and an argument can be made that Tomboy‘s Mickaël uses a masculinized version of the name (the characters given name, Laure, comes from Sciamma’s brother Laurent). Her protagonists, who come from the heart, share one name, and over time, we’ve seen that character grow up. The same story continues with Petite Maman‘s Marion, shown as both a mother, and as a child herself.

Nelly (Joséphine Sanz) is eight years old when her grandmother dies. Her mother, Marion (Nina Meurisse), is thirty-one. At Nelly’s age, she had played in the forest, building a fort among the trees in which to hide in. Her mother takes her to her childhood home, where they clean out the house to sell. Parsing through old yearbooks, journals, and toys in hidden cupboards, Nelly receives what she later says are “only stories” of how her mother had grown up. She asks her father (Stéphane Varupenne) to tell her the “real stuff” of his childhood, to which he tells the girl that he was scared of his father. One morning, she awakens to find that her mother has left early in the morning, having found the house to be too strong a reminder of her grief.

Nelly plays with a ball and paddle in the yard, until she loses the ball over the treetops, and finds herself before a fort just like her mother remembered building. There she meets a girl her own age by the name of Marion (Gabrielle Sanz), dragging branches to close into the walls. The two girls are fast friends, racing through the rainy autumnal leaves and comparing favorite cereals, Nelly joining her to play every day. Marion isn’t allowed out often, her mother, who walks with a cane, reminding her of a scheduled operation she has coming soon. Their meetings soon turn into theater games, Nelly in a too-large tie, and Marion in found strings of beads, reading scripts and playing characters. One such scene shows an assigning of roles, as a countess and a maid, perhaps a callback to the only two secondary characters of the preceding Portrait of a Lady on Fire.

All good things come to a close, and Nelly is not at the house for much longer, a final slumber party, touched with pancakes and laughter, comes, once revelations come to light, in a claimed-by-many “twist” that’s obvious from the beginning. The two girls ease each other’s fears, with Nelly knowing that Marion will be okay after her operation, and how long her mother will live, and Marion promising that she has not left her daughter behind when she grows up. Nelly plays Marion the “music of the future”, and unlike the pivotal music scene in earlier films, it is silent as the girls listen through headphones, until the original track La musique du futur by frequent collaborator Para One (and lyrics by Sciamma herself) plays as the girls spend one last morning together.

Unlike Céline Sciamma’s earlier films about adolescence, Petite Maman sees it through a matured eye. Instead of feeling like a diary entry with old wounds refreshed, the director and screenwriter takes on more of a mother’s perspective to her characters. Petite Maman structures itself to fit within a gap between scary moments for each of its young leads. Marion’s surgery is led up to, but we leave her no longer scared before the film closes, and both Nelly and Marion have already lost their grandmothers by the time we begin, so they are protected from having their most vulnerable fears on screen. The young characters are protected, and insulated from an audience who is privy to them.

This isn’t the first time she’s written motherhood (both Portrait of a Lady on Fire, and television series Les Revenants bring complex stories of motherhood already), but it’s the most nuanced. Nina Meurisse’s Marion makes mistakes, she apologizes, and her young daughter worries that she’s the cause of her initial disappearance because she says her mother struggles to be happy. It’s about the complexities of motherhood, and it does this through a child’s eyes, and makes both the mother and daughter equals to empathize with the other for a few days.

What’s worth noting is, that despite calling this her most intimate film, there’s no autobiographical link. Though the protagonist here, that semi-autobiographical character marked by a name in each film, continues the trend, she is no longer a direct image of the auteur, either when shown as a mother or as a child. This coming-of-age, a girl’s growing up that starts not with Water Lilies, but with Tomboy, has become a life cycle, and the two girls are a new generation. These films still feel so intimate, but they no longer feel like those feelings are now, and have become reflective. Petite Maman is so delicate with emotion because of the strength of the two young actresses to play with such authenticity. Claire Mathon does subtler camerawork than she has in the past, but her hazy, glimmering interiors shine when the two girls play.

Shot in the same forests in Cergy as Tomboy, this feels like it is a homecoming film, one playing to previously explored strengths of working with children and small stories, while tackling loftier themes of grief and parenthood in a more than worthy follow-up to the smash hit period drama that came before. While the Miyazaki influence is clear, the Studio Ghibli film that feels most present is When Marnie Was There, and its arc of friendship found through family connection. The Sanz twins are magnetic as leads, and Sciamma’s own playful costume design is particularly memorable for how bright and simple it is. It’s a transitional film after a major work that shouldn’t be lost for how mature it is. Sciamma seems like she’s grown up as a filmmaker with Petite Maman, knowing when to distance herself, and starting to feel like a mother to her stories instead of part of them.

This review is from the 71st Berlinale Film Festival. NEON picked up U.S. rights to Petite Maman on Wednesday, March 3, 2021. 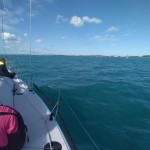 Sarah is a freelance film writer who loves Portrait of a Lady on Fire, empathetic foreign cinema, experimental films that give you headaches, but mainly just Portrait of a Lady on Fire. She is currently directing her first feature film, which feels like it’ll never be finished (still isn’t), and will be the first to reclaim New French Extremity classic Martyrs as a feminist film (ironically or not, we shall not know). You can find her on Twitter @newsfrmhome.