Ted Lasso is, without a doubt, one of last year’s best comedies. With its second season set to premiere on July 23rd on Apple TV+, the series has received numerous nominations and wins, including Golden Globe and Screen Actors Guild wins for Jason Sudeikis for his lead performance in the comedy hit. Ted Lasso is now a strong contender in several categories for this year’s Primetime Emmy Awards. But what makes the show so successful?

The titular role is undoubtedly one of them. As Ted, Jason Sudeikis brilliantly rocks his mustache, perfectly coiffed hair, and a lifelong aversion to tea – or, as he refers to it, garbage water. These are just a few of the elements that drew people to this series. Another quality that stands out is his genuine kindness, a feature that positively warms Rebecca’s heart (Critics Choice winner Hannah Waddingham). The woman, a current owner of the AFC Richmond soccer club, is yet another factor contributing to Ted Lasso’s overall success.

Most notably, it’s her unexpected yet empowering and very sweet friendship with Keeley (Juno Temple), the girlfriend of one of the soccer players, Jamie Tartt (Phil Dunster). Hannah Waddingham does an excellent job portraying Rebecca, who’s always ready for the obstacles daily thrown in her way. Her stoic demeanor, upright posture, and polished, sophisticated outfits have the potential to intimidate and even terrify. She certainly has that effect on Keeley at first, as the latter admits: “You know, I’ve decided to not be scared of you anymore,” she says, for which Rebecca frowns and replies, “I didn’t know you were.” Keeley glances and her and says. “Oh yeah, I was, like, fucking terrified of you.”

Rebecca gives off a suspicious vibe at first. As the new owner of the Richmond team, her goal is to destroy it, or rather to allow it to destroy itself, by hiring Ted Lasso, an American football coach, to prepare the players for the upcoming season. The reason is Rupert (Anthony Head) – her cheating, misogynistic, and thoroughly patronizing ex-husband who has a long history with the club. The couple divorced after Rupert had multiple affairs during their marriage. The media heavily covered the situation, making Rebecca look like villain number one and Rupert – like a hero. In one of the scenes, she even says, “Well, the press are never awful to men. No one ever pays a fortune for a photo of a naked man on a yacht in Minorca a week after his divorce.”

Initially, Rebecca wants to sell the photos incriminating Kelley and Ted, which were taken by the photographer planted by her. But what happens in the pictures isn’t true at all; it’s just a matter of a perfect angle and precise moment. Keeley, on the other hand, receives a tip, and Rebecca, albeit not entirely of her own volition, assists and buys them out. “So, I spoke to the owner of The Sun,” she tells Keeley, for which the woman exclaims, “You spoke to God?!”. That’s where their friendship begins.

At first glance, Keeley’s character doesn’t seem to significantly impact the series’ plot. Juno Temple’s portrayal of Keeley is her first comedic role; she is best known for her profoundly serious portrayals. But her fierce and genuinely kind model, who’s famous for “being almost famous,” captures our hearts from the very first episode. It’s not just her initial fondness for Ted Lasso, who is largely ignored by the rest of the team. In fact, Keeley appears to be very similar to the main character of the Apple TV show. At first, we might expect her to be a typical character of a model from the late 1990s to the early 2000s: mean, condescending, and perhaps overly self-confident. But Keeley is anything but, and it’s this aspect of Temple’s performance that I find most appealing.

After Rebecca helps her and Ted, their unexpected and truly empowering friendship begins. As a “thank you,” Keeley visits Rebecca in her office and gifts her with a cactus. “Made me think of you. It’s strong and a little bit prickly,” she explains. Their support for one another only grows from there. When on the “richmondian” red carpet, Keeley, a very experienced model, gives an anxious Rebecca a variety of tips on how to pose to look good: “Just put one foot in front of the other, yeah? And put your hand on your hip, and make, like a claw shape.” It’s such a small, seemingly trivial thing, but we appreciate its simplicity and the sense of empowerment that it carries: “Look at her! She’s fucking fit!” Keeley yells, standing behind the photographers and cheering Rebecca on.

Later on, they have a very sweet and, in fact, focal moment in a washroom when Rebecca informs Keeley that Jamie may not be worth an effort after all: “Everyone makes mistakes, but I was married to a man for 12 years who never once took responsibility for any single one of them.”

We see their interactions in Ted Lasso, and we wouldn’t expect them ever to be friends. They’re so different from one another. Rebecca is serious (at least at first) and all about business, while Keeley is funny and loud. The stereotypes we were fed over the years made us suspicious. The obvious choice for Rebecca and Keeley would be to pit them against each other.

But the creators take a different path and instead create a loving bond between them. While the model is slightly infatuated with the club owner and her admiration borders on slight flirtation, it appears to have a very positive effect on Rebecca, who never truly had a genuine female friend in her adulthood. Their friendship only advances, and they continuously support each other on the way while existing in a man’s world, which Richmond is.

Rebecca’s initial intentions change in the end, influenced by her friendship with Keeley and Ted’s genuine kindness. Following Rebecca and Keeley’s discussion of accountability in the past, it is now her turn to accept responsibility for her actions. She comes clean to Ted after Keeley discovers the truth behind the paparazzi photos. They start again, stronger than before.

When Rebecca offers Keeley a marketing consultant position, the younger woman is rather wary of it. She doesn’t want people to gossip that her friend gave her a job. But Rebecca quickly dismisses it an assures that “men give each other jobs in toilets all the time.” In fact, Keeley turns out to be a wonderful and talented marketing consultant, helping the team and Rebecca.

While the depiction of female friendship has evolved over the years, it is still quite surprising when the creators do not take the stereotypical route and depict a mean, back-stabbing kind of female friendship. However, in Ted Lasso, we are given a pair of complex, multi-dimensional female characters whose unexpected bond is both remarkable and beautiful. As there is an age different between them, we would expect the generational differences come between them. But they both learn from each other and lift each other up – I can’t wait to see what’s in store for them in the second season.

With the Emmy voting now open, it would be a shame if Juno Temple and Hannah Waddingham were not nominated for Supporting Actress in a Comedy. They certainly deserve it, and many award predictions show that their names should be on the ballot.

Voting for the Primetime Emmy Award nominations continues through June 28.

Season one of Ted Lasso is available to stream on Apple TV+. 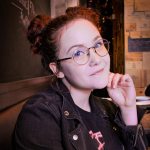