I published a list a few years ago of my Film Starter Pack, a slew of films from a variety of genres that are vital to one’s undertaking of film history. While the list does include films from almost one hundred years ago, that doesn’t mean it’s only a film critic’s paradise. Yes, some of the movies are award-winning gems and imperative viewings in understanding how film developed as a medium, but others are just a riotous fun time. And I would start listing all of them here again because each is impressive and worth a rewatch.

Consider this a modest update to that list with a mix of films that are sure to cure your quarantine blues and how to watch them.

For some laughs and a grand sing-along time, “forget about your worries and your strife”

On multiple best of the year lists, this prequel-sequel takes you back to the Greek Islands to further the happy-go-lucky story of Sophie and Donna with even more ABBA music. If a fun sing along can’t cure your blues, then you’re in for a very long quarantine!

BOPS, courtesy of Pasek and Paul, that will lead you down a rabbit hole of their composing discography, from Dear Evan Hansen (also a great cry and amazing OST with Ben Platt) to The Greatest Showman. The film is also just a fun trip around LA’s hot spots including a very non-social distancing, jam-packed 105.

Showcasing an iconic and young Toni Collette, this movie follows Muriel in trying to achieve her dreams of getting married despite all odds. Enjoy dancing and laughing with more ABBA hits and lots of 90’s makeup.

Learn the history of Harlem’s ball scene in the 80s and 90s and how these safe spaces allowed LGBTQ people of color to blossom along with voguing, reading, and iconic ballroom moves.

The most beautifully crafted film (yes, even more than The Tree of Life) made by the genius Wong Kar-wai, whose entire filmography is flawless, from Happy Together to The Grandmaster and Chungking Express. This gem follows a tender relationship between a man and woman who discover that their partners are engaging in an affair yet try not to follow suit.

If you’ve already spiraled and need a good cry

Sci-fi and wholesome and a romcom to boot, worth pouring your heart over. Its simple message of living every day to its fullest will have you laughing and crying until the very bittersweet end.

I’m not sure anyone has ever created such a perfect feature debut as Greta Gerwig has here. This sharp, witty film balances one’s search for independence married by familial struggles and high school heartbreak.

My first memory of Noah Baumbach and Greta making a flawless team, he directs her as a struggling NYC dancer with a very strong personality and even bigger dreams. This screenplay, one like you’ve never seen before, has me coming back time and time again.

Greta, showing no signs of a sophomore slump, breathes new life into the Marsh family with a compelling screenplay and a sisterhood stronger than any traveling pants.

A uniquely designed film following Lola as she races against the clock to find $100K that her boyfriend lost. This film won multiple awards in the festival circuit and it’s only 80 minutes long!

Maybe a bit on the nose, but enjoy this punny navigation of the human body while a white blood cell and a cold pill try to stop a deadly virus from taking over Bill Murray.

For trying to escape this planet during the apocalypse, to a desert island, into a board/video game

A stellar cast (and Hans Zimmer score!) to guide you through black holes, five dimensions, and other worlds in search of a new home amidst a food shortage on Earth. This is another wonder created by Nolan that will have you praying for no Tenet delay this summer.

In solidarity for Tom Hanks and his precious Vegemite quarantine updates, we all can understand a little too well the friend he made in Wilson all these years and miles ago. I still cringe at that toothache scene.

A fully-bearded Robin Williams, riotous monkeys, scarily large spiders, an elephant stampede, lots of dice rolling, and much, much more. What gave me nightmares years ago still delivers on imagination today. Fun Fact: Jumanji also stars a young Kirsten Dunst who had, the year prior, starred in Gillian Armstrong’s adaptation of Little Women (1994).

For a feel good moment because we all need one

Agnes Varda’s final film before her untimely passing last year. One of the French New Wave’s most iconic filmmakers, Varda leads the viewer to find art and happiness in unlikely spaces. Which, by now, is every corner of your apartment!

And if you don’t know what Kanopy is, it’s a treasury of films provided free via your local library or university that you absolutely must shuffle through!

What films are getting you through these trying times?

Nick is a dentist by day, avid moviegoer and home cook by night. While recently becoming the only person to ever correctly predict all 24 categories at The Academy Awards on Gold Derby, he has discovered a new love for Letterboxd and enjoys discussing everything film from new releases to old classics on his podcast, “Oscar Wild.” He loves awards season as much as Moira Rose on Schitt’s Creek and has been writing for over ten years about films that inspire him on his blog, “Movies and Smoothies.” Living in New York City still feels like a paradise to him with a multitude of indie screenings and movie theatres on every corner. You can find Nick on Twitter at @sauerkraut27. 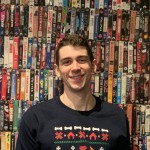