Krysta Rodriguez has an extensive Broadway resume, playing in major productions like In the Heights and Spring Awakening. She has also appeared in a number of TV series, both musicals, like Smash, and comedies, like the underrated Trial & Error. Her passion for musical theater and acting talent converge in what may be her biggest role to date, that of Liza Minnelli, the legendary Oscar-winning actress who was also a close friend and confidante to fashion designer Halston in the Netflix limited series of the same name.

In our conversation with Rodriguez we covered a number of topics, including the challenge of playing a real person in this epic piece of history. Rodriguez conveys a tremendous enthusiasm for the work she does and the joy of tackling this role and this character. We got to discuss her favorite costumes and set pieces, and what she’s looking forward to doing next. She even launched an interior design business during the pandemic!

Halston is currently available to stream exclusively on Netflix. Krysta Rodriguez is Emmy eligible for Outstanding Supporting Actress in a Limited Series, Anthology Series or Movie. 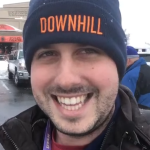