A trademark of VICE is on the ground reporting—journalists imbedded with their subjects where the action happens. Then came a global pandemic. And like everything else in its wake, COVID-19 forced producers to upend plans for the docuseries as Vice made its move from HBO to Showtime, pivoting much of their season one coverage to focus on the pandemic’s effects around the world. In season two, returned to the field covering stories in Egypt, Haiti, Afghanistan, Columbia and other hotspots around the globe.

Now, celebrating VICE on Showtime’s second consecutive Emmy nomination for Outstanding Hosted Nonfiction Series Or Special, Chase joins AwardsWatch to take us inside the decision-making process, the stories, and to the heart of what makes a VICE story unforgettable television.

Shadan Larki: I wanted to start at the very, very beginning; you have a degree in film. How did you find yourself doing so much journalism?

Beverly Chase: Oh my gosh, that’s a good question! You know, well, maybe you don’t; I came up in the industry as an editor. I have always been passionate about editing and storytelling. Before coming to VICE, I was an editor at NBC, where I spent most of my time in news on both quick turns and long-form docs, and I just learned so much there from the best journalists and storytellers there. It was an absolute master class. But I came to VICE because I was really in awe of the work the news teams were doing there. I have a background in filmmaking and VICE was telling these rich and very stunningly cinematic stories in a way that no one else was doing, it sort of combined both of my passions for filmmaking and journalism.

Larki: You have these incredible VICE crews gathering an intense amount of footage that you then have to distill it down to this 15-minute news documentary. Given your experience as an editor, how do you decide, essentially, where your story lies within all that coverage?

Chase: I think that’s really one of the greatest superpowers of the series. Our editors and film teams are so strong. The editors and producers sit with the material and really let the story dictate itself based on the scenes that they were able to capture in the field. We don’t edit based on preconceived scripts. We let the scenes dictate that end story. We always want to start with our most dynamic and engaging material and build out the story from that point.”

Larki: You’ve been open about the immense challenge COVID-19 has presented. From the perspective of an executive producer, how did you balance trying to keep people safe while also informing the public?

Chase:  It has been quite an experience, I’ll say. When we wrapped the first season, we definitely did not expect to be still dealing with the impacts of the pandemic as acutely as we were. But the reality is we are facing a lot of the same issues that we were before. So much has changed in the way we are working; because of the pandemic, we are still working remotely, which has been really challenging, but I think that we have been excellent at pivoting in a way that enables us to keep collaborating in real-time and delivering a premium show every week. In terms of risk, we will continue going where the stories are happening, but our risk assessment team is outstanding, and they always have been. Their expertise has allowed us to safely report on domestic terrorism or shoot in war zones. The teams get to work closely with our head of security to maintain rigorous COVID safety protocols. We make sure everyone gets tested. It is just a constant conversation, and we consider each shoot very carefully. No one deploys without training and safety protocols. If anyone is uncomfortable, they don’t have to travel to the story. With that said, so many of our journalists come to Vice because we are dogged to send people to where the story is happening. That will always be very important to our team.

Larki: I’m curious if you could give me any insight into the logistics behind a Vice episode. What does that look like in terms of shooting schedules, editing, etc.?

Chase: In the news, time is not a luxury that anybody gets. Regarding how the show gets made—we take pitches from our long-form team, Showtime team, the wider news team, digital, and sometimes freelance producers. From our perspective, a great pitch is a great pitch. It doesn’t matter if it comes from the most seasoned producer or an intern. If it is a great story, we will figure out a way to make it happen. Our internal senior team selects the pitches, and then we vet them to make sure they are ready to go to Showtime. Once Showtime gives us their feedback on the story, they give us the official green light, and then we immediately launch into production.

So, that’s when the real work starts. We report the stories in more detail. We have pre-meetings to discuss the look, the feel, the characters, and the narrative structure. We talk through any legal concerns, security concerns, and the shooting timeline. It is usually a pretty quick turn because we are dealing with really timely content.

Then, the teams deploy, and they spend however long as it takes on the ground to get the story. It can take anywhere between three days to a month. But, it’s rarely that long, and then they come back. Also, when crews are in the field, we are in constant communication with them because security is always top of mind. When they come back, we settle into post-production. Depending on where we are in the delivery of the show, we can have up to 5 weeks to edit, which is a luxury for us. Sometimes we have to edit something in a few days depending on how timely the story is and whether or not we’re mid-season.

Larki: When you’re sitting in a pitch meeting, what is it about a particular pitch that makes you think, “We have to do this one.” What makes a VICE story a VICE story?

Chase: Oh, that is a great question. In my mind, it’s a story that is newsworthy, that is impactful. For us, it has to have events that are unfolding in real-time because we really want to have that immersive feel to each story that we do. Compelling characters are key for us. We love stories that are investigations. We just want people to learn something they knew nothing about and also have the context for why that event is happening.

Larki: Is there a story that you would like to do that you haven’t covered yet?

Chase: That is a good question, a tough one. I do feel like we are really good at checking a lot of the boxes, topically. In our first season on Showtime, we focused a lot on the pandemic and how it was being handled across the globe.

I think part of what makes a great Showtime piece is that we don’t know yet what those stories are. And that is what makes them special. When somebody puts a pitch in front of us that kind of blows our minds, you are not really craving that story in advance because you don’t know anything about it. That is what I think makes a great story.

Larki: COVID is still very much a part of our lives, but do you know anything about what is to come for the show?

Chase: You know, I don’t. (Laughs). Because we are the news, the news is going to dictate the places we will go. We are keeping a really close eye on Afghanistan. We love covering climate issues and haven’t really had a chance to dive into that within the series. There are so many different directions we could go. Thankfully, Showtime has been so supportive of us, taking us to wherever the story goes.

Beverly Chase is Emmy-nominated for VICE in the category of Outstanding Hosted Nonfiction Series or Special. 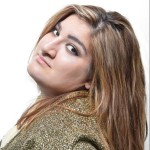 Shadan Larki became captivated by awards ceremonies at the age of four when she watched Roberto Benigni climb his way to the Oscars stage. She attended The University of Texas with the dream of becoming an entertainment journalist. Her work has since appeared in numerous local and national publications. She also serves as a social media and marketing manager for non-profits and small businesses in Houston, TX— that’s where you can find her ferociously binge-watching movies & TV. And always on the hunt for her next great read.