In 2017, having literally moved to Lisbon in the name of soccer motherhood, superstar Madonna found herself a tad despondent. There was the fact that she didn’t have any friends in the city, for one, but there was also the always-taxing Trump era, which she was uneasily watching unfold from afar. “I started to feel frustrated as an artist, and quite lonely,” she’d later recall of this period.

Her saving grace eventually came in the form of an invite to a local living room session, where—in her words—people “sit in someone’s home and drink wine and play music.” She was suddenly surrounded by artists again, and immersed in genres that she hadn’t previously spent much time with, including fado, morna, samba, and funaná. Two years later came her 14th studio album, Madame X (2019), told from the perspective of her multifaceted, freedom-fighting alter ego of the same name.

This week, an eponymous concert film arrives on Paramount+. Co-directed by Ricardo Gomes and SKNX (aka Sasha Kasiuha and Nuno Xico), Madame X chronicles the Lisbon stops of her Madame X Tour, which took place over seven months in late 2019 and early 2020. (More than a dozen shows had already been cancelled due to injury—unprecedented for the star—when the pandemic prevented its final two from happening that March.) The film is just the latest chapter in the long-running friendship between Madonna and ViacomCBS, which has owned MTV since 1985 (almost as long as she has). It’s debuting on the conglomerate’s fledging streaming platform just one month after she helped it celebrate the network’s 40th birthday at the VMAs.

Conceptualized as more of a cabaret experience than a pop concert, the Madame X Tour saw Madonna stage a series of theater residencies—playing anywhere from three to 16 shows per city—across the United States and Europe. Aiming for “an intimate experience” with fans, its setlist was broken up by improvised monologues, interactions with the audience (including whatever famous person had wandered into the theater that night), and a beer delivered to Madonna on stage during each show. In the name of human connection, attendees were even required to seal their phones in locked pouches for the duration of the set. As she wrote on Instagram, “If you cannot experience Madame X theatre without the use of a recording device-then this show is not for you!! #liveinthemoment #nophonezone.”

It’s strange, then, that despite the great pains taken to make the show feel personal and stripped down, the filmmakers have gone with the exact opposite approach in post, and unfortunately to the project’s detriment. Overly crammed with mixed media and CGI and featuring what might be Madonna’s most headache-inducing editing yet—impressive given that this has been the number-one fan complaint in response to her concert films for years—Madame X’s visible seams threaten to drown out everything from the talent on stage to the album’s messaging.

The Madame X era has arguably seen Madonna attempt to synthesize her career thus far—every role that she’s played in pop culture, every cause that she’s come out in support of, every bit of imagery that she’s gravitated towards, every influence that she’s named as formative. The project’s closest thing to a thesis would be James Baldwin’s famous pronouncement that “Artists are here to disturb the peace,” a quote that has played a major role in Madonna’s recent marketing. (Baldwin, for the record, is given both the first and last word in the show and film via his writing.)

The film begins with a montage of the star’s career highlights from the last four or so decades, a clear emphasis on all the flack that she’s received for speaking her truth (and, in one case, daring to be 35 years old). Interspersed throughout the next two hours are clips from her music videos and earlier films like Truth or Dare (1991), from which she excerpts the speech she gave in 1990 after being condemned by the Vatican.

Madonna has a long history of mixing media like this for concert films, and, taken together, it does hammer home the idea that she’s returning to career-long references and themes here—not going through, for example, a Baldwin phase. The problem lies in the editing: rarely does more than a full second go by without a cut. We almost never get a good zoomed-out look at the whole stage, nor an uninterrupted phrase of choreography. Certain quotes don’t stay up long enough on screen to register for even the speed-readers of the world.

There’s also perhaps too much media being mixed at once. Computer-generated flames are at one point added to the stage; subtitles constantly switch fonts and colours; the film is pieced together from multiple cameras and audio sources, sometimes giving it the feel of one of those fan-edited concerts on YouTube. (Something like half of its footage comes from reshoots that were done earlier this year, and you can always tell when we’ve left Lisbon.) All of this means that it’s hard to ever really get lost in the project; what should feel stirring often ends up feeling exhausting instead. The questionable production also makes zero sense for a star of Madonna’s stature, one whose previous concert films have premiered at Cannes and taken home Grammys.

There are some truly great moments here, to be sure. Madonna’s vocals are always strong—she actually ululates during “Batuka,” which everyone should hear at least once—and the musical arrangements are fantastic. As usual, she’s put together an ensemble of boundlessly talented musicians and dancers. One standout is boyfriend Ahlamalik Williams, with whom she’s officially been dancing for six years; another is trumpeter Jéssica Pina, a newer collaborator whose work helps “Human Nature”—an already perfect song—somehow reach new heights. For many, the biggest highlight of the film will surely be “Frozen,” where Madonna sings in the middle of a massive projection of her daughter, Lola—an emotional full-circle moment for any Ray of Light (1998) devotee.

On that note, the film is probably best suited towards those fluent enough in Madonna to be able to appreciate its many cameos, and perhaps to not be jarred by her very specific sense of humour—to say nothing of her sometimes muddled politics. (If you were bothered by the album’s consolidation of drastically different kinds of oppression, you might not enjoy that in feature film form.) The tour setlist has been truncated slightly for the film, and at least one of its horde of directors should have considered being similarly cutthroat with its monologues, which are bloated with Trump-era references and catchphrases that don’t quite land in 2021.

To some degree, the film’s overall messiness makes it the perfect artifact of a brain-melting chapter in American culture. But it ultimately suffers for how much it bites off, trying for both timeliness and timelessness, intimacy and stadium-like overwhelm. Then again, I’m not sure how much Madonna really cares. “I hope that I have disturbed your peace,” she says at one point in the film. “And I will continue.”

The Madame X tour is now available to stream exclusively on Paramount+. 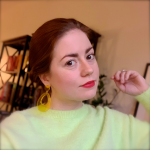 Sydney Urbanek is a Toronto-based writer on movies, music videos, and things in between. She wrote her MA thesis on Jonas Åkerlund’s film and music video work. She also writes a newsletter called Mononym Mythology about mostly pop divas and their (visual) antics. You can find her on Twitter and Instagram @sydurbanek.