Despite a shortened Oscar season, last year saw box office hits make a big impact on the Best Picture list and a seeming return of the big studios to the race until three-year old indie Neon swooped in and turned Parasite into the first non-English language winner in Academy history. Last season also gave us four films that earned 10+ nominations for the first time ever. This year could once again see those numbers but studios are going to have to make some Sophie’s choices with the sheer volume of their content and learn some hard lessons from last season.

At the top of that list is Netflix, which earned 24 Academy Award nominations last season, the most of any studio in Oscar history for a single year. But, it only went home with two awards: Documentary Feature (their second) and Best Supporting Actress for Laura Dern in Marriage Story (their first acting win). The streamer first broke through the year prior with Roma but last year found itself with probably too many contenders and a constantly rotating priority that ended up with $150M Martin Scorsese gangster epic The Irishman going 0/10. They’re going to run into a lot of similar issues this year with even more contenders in their pocket and how they’re going to levy each of their strengths. The most likely contender for them at this stage is Mank, from Oscar nominee David Fincher. The film details screenwriter Herman J. Mankiewicz’s tumultuous development of Orson Welles’ iconic masterpiece Citizen Kane and was written by Fincher’s father Jack. It’s impossible to not think this period piece, which stars Oscar winner Gary Oldman, isn’t going to make a huge impact. But will it be Netflix’s true breakthrough or another Irishman? Either way, they’ve got by far the biggest slate of heavy hitters this season with new films from Spike Lee (Da 5 Bloods), George Clooney (Good Morning, Midnight), Ron Howard (Hillbilly Elegy), Charlie Kaufman (I’m Thinking of Ending Things) as well as some smaller and riskier material like Andrew Dominik’s edgy Marilyn Monroe (non)biopic Blonde with Ana de Armas, the Untitled Nora Fingscheidt Project with Sandra Bullock and Viola Davis, George C. Wolfe’s Ma Rainey’s Black Bottom (also with Davis) and The White Tiger from Ramin Bahrani.

A24 is licking its wounds after bringing a stellar slate of box office and critical hits last year in The Last Black Man in San Francisco, The Farewell, Waves, The Lighthouse, Midsommar and Uncut Gems only to end up with a single nomination (for The Lighthouse‘s cinematography). Some studios are simply better when they have only one or two focuses and this year A24 has even more to work with and even harder decisions to make. I expect either Sundance winner Minari from Lee Isaac Chung or Sofia Coppola’s On the Rocks (with Apple) to be their #1 this year. They also have the Untitled Lila Neugebauer Project aka Red, White, Water with Jennifer Lawrence (could be a hit), Miranda July’s Kajillionaire (feels like Gotham/Spirit Awards material), The Humans, based on the Tony-winning play and starring Beanie Feldstein and Richard Jenkins, C’mon C’mon from Oscar nominee Mike Mills and starring newly minted Best Actor winner Joaquin Phoenix, The Green Knight from David Lowery and starring Dev Patel, and Joel Coen’s Macbeth starring Frances McDormand and Denzel Washington (if it’s ready this year).

20th Century and Searchlight Pictures (formerly under Fox and now Disney) are jammed with contenders including 20th with the new David O. Russell starring Christian Bale, Margot Robbie and Michael B. Jordan. Russel’s last two films earned Best Picture and Director nominations as well acting nods in all four categories. They also Steven Spielberg’s adaptation of one of the most successful Oscar films of all time, West Side Story and Ridley Scott’s King Charles VI film The Last Duel with Adam Driver, Ben Affleck, Matt Damon and Jodie Comer. What’s curious about those three films is that two of them have only just begun production (the Russell and the Scott) so getting them locked in time for a late 2020 release may be tough (The Last Duel is currently listed at a January 8, 2021 release). West Side Story already has a locked in date of December 18. How is the studio going to manage three huge wide releases that close together? The situation becomes even more complicated when you look at Searchlight’s slate of Nightmare Alley from Oscar winner Guillermo del Toro (currently shooting) which has been assured to be a late 2020 release and the new film from Oscar winner Taika Waititi (Next Goal Wins), Chloé Zhao’s Nomadland starring two-time Oscar winner Frances McDormand, Michael Showalter’s The Eyes of Tammy Faye starring Oscar nominees Jessica Chastain and Andrew Garfield and the summer release The French Dispatch from Oscar nominee Wes Anderson. Choices. Lots of choices.

Focus Features is looking to come back to the Best Picture race and their best bet might be Stillwater, from Best Picture director Tom McCarthy (Spotlight). It stars Oscar winner Matt Damon as a father who travels to Europe to be his daughter (Oscar nominee Abigail Breslin) who is accused of murder. They also have the Sundance critical hit Never Rarely Sometimes Always from Eliza Hittman, the feature directorial debut from Robin Wright (Land) and possibly the new Paul Thomas Anderson. PTA was the Oscar nomination morning surprise two years ago when his Phantom Thread went from no festival and almost no guild attention to a Best Picture and Director nominee.

Warner Bros looks to have some likely box office hits with the new Christopher Nolan (Tenet), who finally earned Oscar cred with Dunkirk and the feature film adaptation of the hit musical In the Heights (from a pre-Hamilton Lin-Manuel Miranda) from Crazy Rich Asians director Jon M. Chu and Denis Villeneuve’s new vision for Dune starring Timothée Chalamet, Rebecca Ferguson, Jason Momoa, Zendaya, Josh Brolin, Oscar Isaac and Javier Bardem. There’s a lot of ways this could go; it could be Arrival or it could be Blade Runner 2049.

So what does reigning Best Picture studio Neon have this year? So far, just one – Oscar winner Kate Winslet and Oscar nominee Saoirse Ronan in Francis Lee’s 19th century lesbian romance Ammonite. While this doesn’t scream Oscar barn burner, the indie studio should feel a bit emboldened by its Parasite win. It’s also so early that Berlin, SXSW and Cannes are likely to give Neon multiple opportunities to pick up more properties for Oscar season.

Here is my top 10 list of Best Picture contenders for February and a full breakdown of contenders by studio with director, cast, synopsis and release date where available.

On the Rocks (with Apple+)

The Roads Not Taken

The King of Staten Island

The Trial of the Chicago 7

The Eyes of Tammy Faye

The Personal History of David Copperfield

News of the World

Untitled Fred Hampton Project aka Jesus Was My Homeboy

Those Who Wish Me Dead

The Story of My Wife

The United States vs Billie Holliday 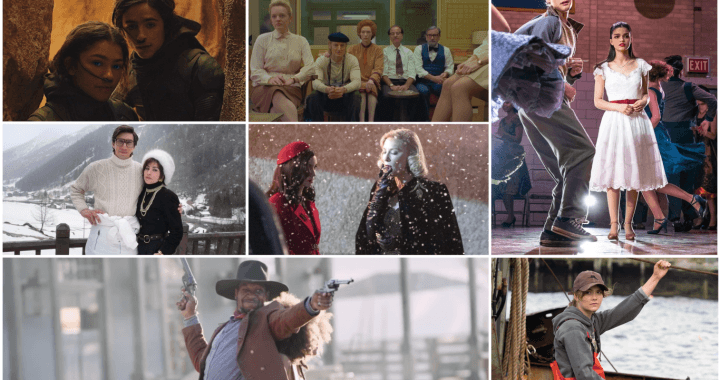