In mid July of this year, the 2021 Emmy nominations were announced. All of the best of TV was highlighted, and were able to call themselves Emmy nominees. This included a magnitude of releases that helped get people through the difficult 2020, but also included a last second submission from Netflix with the comedy special that took the world by storm in Bo Burnham: Inside.

Because of Burnham’s auteur work in the special, all 6 of these nominations are accredited to him, making him the most nominated person at the Emmys this year. As of now, there are three people (Moira Demos, Amy Sherman-Palladino, and Dan Levy) who are tied for the most wins in a single year with 4. Burnham has a real shot to tie, and even break, this record and become one of the best and most accomplished Emmy winners on his very first try.

The journey to get to this point for Burnham was a difficult one. For Bo Burnham, 2020 was a year that offered a massive amount of promise for the artist. He had spent approximately 5 years away from performing live on stage, working on himself not only as an artist, but mentally as well. He was voyaging back from a dark place, one that caused a mid 20s Bo Burnham to have panic attacks on stage, and had finally arrived at a place of inner peace that he had not experienced in quite some time. And then, as Burnham says, “the funniest thing happened.”

This “thing” he was talking about was a worldwide pandemic that would shift the very fabric of humanity. The COVID-19 pandemic was, and still is, a catastrophic blow to everyone around the world. For the first time in modern human history, the entire planet was suffering from the same disease.

This newfound Burnham managed to do what so many people talked about doing, but never did, during the pandemic, and that was put this time inside to good use and make something of it. Burnham had worked so hard to get where he was, and wasn’t going to let this pandemic foil the creativity he had developed to share. He decided that if people couldn’t come see him, he would go to the people.

What he brought to the people was far more than any normal comedy special could accomplish. For months over the year of 2020, Burnham stayed inside his one room house to work on this special, vowing to not leave until it was finished. Over the course of this year, he created music and art that would become a culmination of what most people were facing when it came to the lockdowns.

Burnham’s classic form of musical comedy, a version of comedy only few performers have really been able to pull off, works in the best of ways in this kind of medium, and it’s clear to see why he was able to nab the Music Direction nomination. The songs recorded were all done by Burnham himself. Every vocal and instrumental note, every harmony, and every other musical aspect of the songs were done entirely by Burnham. He crafted these songs to fit within this special and created some of the best music of the entire year.

Being stuck inside this one room, every aspect of the special had to be carved out by Burnham. This includes the directing, writing, recording, editing, and all around scenery of the entire special. This truly auteur work brought the former YouTube star back to his roots in having to work on every aspect of the filmmaking process, and pulled them off beautifully. He was able to strike a deal with Netflix, the same company that produced his last 2 specials (what. in 2013 and Make Happy in 2016), and released his work to the masses.

The songs from Inside have been taking the world by storm. “White Woman’s Instagram,” “Welcome to the Internet,” “Jeffrey Bezos,” and more have all been a staple of TikTok and Spotify Playlists (the album has surpassed 225 million plays on Spotify alone). He was able to create a different scenery for each of the songs, and was able to have each of them stand on their own throughout the project. His Directing for a Variety Special and Picture Editing for a Variety Special are a testament to the amount of work he had to put in to create a truly cinematic experience from the single room he was in.

By doing this all alone, there had to be times during performing where he had to do more than just perform, but he had to subtly change the landscape around him, while remaining in this room. These creative choices and means of showcasing them, provide some of the best direction, and one of the best looking pieces of filmmaking this year, no matter the medium.

From all of these diverse and incredible songs, Burnham received an Original Music and Lyrics Emmy nomination for “Comedy,” which was shrewdly the only song officially submitted, and deservedly so as it might be one of the best satirical songs ever written. When listening to it, it’s clear as to why this song works as well as it does. The underlying take-down of the “White Savior Complex” and how white people feel the urge to fix every problem they initially created, creates this satirical atmosphere in which Burnham shines.

This is the first full-length song played during the special, and it also serves as the groundwork for much of the special itself. The journey that is taken, in a way, starts and ends with this song. Burnham’s proclamation of being able to heal the world with comedy eventually flips itself as he has to come to the realization that comedy itself can’t heal the world, because comedy itself couldn’t heal him. I’ll admit there might be better and catchier songs, but there is not a song with as much meaning and relevance to this entire project as a whole more than “Comedy.”

This special also, in a way, provides a documentary of the life that Bo Burnham lived in order to even make this special. Filled with skits and songs, the writing of this project, which he was nominated for with Writing for a Variety Special, had to be top notch, as this film is as much a narrative story as it is a comedy special. There was a true journey taken by Burnham, and you can see character progression and changes. Every funny and heartbreaking moment told a story, and the realization that he was actually living this life he was portraying made this all the more effective.

With Inside, Bo Burnham crafts a surrealist and heartbreaking exploration into the deteriorating mental state that many people experienced during the “Pandemic Era.” Here, Burnham is at his most vulnerable and creates a funny but personal look of some of the worst parts of this past year. Bo Burnham: Inside is an artistic masterpiece that will make you laugh, cry, and truly reflect over the “Pandemic Era” as a whole.

In the future when people ask, “what was it like having to lockdown for over a year,” this will be my answer. For Burnham, this special was his livelihood and for a year it served simultaneously as the only thing keeping him sane, while sending him off the rails. This art that Burnham has created will transcend time, and go down in history as much more than just your average comedy special. This was a way of life that everyone had to live and had to share and for as long as I live, watching this will always give me a “Funny Feeling.”

Bo Burnham: Inside is currently available to stream on Netflix now. 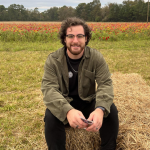