To say the very least, South African filmmaker Oliver Hermanus has built up a robust filmography. His exceptional debut Shirley Adams was followed by 2011’s Beauty, a stirring story of queer repression that won the Queer Palm at Cannes, and his last film, The Endless River, was a Golden Lion contender in Venice. Moffie, also a Venice debutant, is his magnum opus to date.

Again, here, he plays with themes of queer clandestinity and repressed desire: the film is guided by its central character study, that of newcomer Kai Luke Brummer’s Nicholas, a gay teenager who falls in love with another conscript. But broader thematic grounds are traversed. Set in the early eighties, Moffie is, too, about the racist tyranny of apartheid. Why this will resonate with audiences in the US, a nation with its own history of state-embedded racial oppression, needn’t be elaborated.

We spoke to Hermanus about the meaning of “moffie,” queer coding in war movies, and his latest project, Living, an adaptation of Kurosawa’s monumentous Ikiru.

Jack King: You’ve spoken before on the power of the word “moffie” itself: to quote, that “everyone in South Africa has a story with it.” Is it as potent in the present?

Oliver Hermanus: The word is very potent. It’s still definitely a dangerous weapon. And it’s used constantly. I think, even today for young people in South Africa, it’s a word to overcome. I actually did a series of very, very prominent queer people, activists, actors, different men – I got them to tell me the story of their relationship with the word, as a part of promoting the film, but also as an awareness campaign about how that word really needs to be neutralised.

Were you surprised by the film’s reception in South Africa?

In South Africa, making a film is a revolutionary act. If you’re making a film about our past, and our past is polarised, there’s definitely a question of ownership: who gets to tell whose stories, and what is your interesting perspective on those stories? I’m not a white South African, I’m a mixed-race South African, so with Moffie I was making a film about a generation of men of whom I am not a member, nor is my father. So there was always the fear that the film would be politicised that way, as a question of perspective.

But, seemingly, we were able to land the film with the South African audience, where there was appreciation for it, trying to be honest as we could about the experiences of [Moffie’s protagonist, Nicholas], regardless of the political context of the setting.

The U.S., like South Africa, is a nation with its own history of state-embedded racism. Do you think it’s lazy to compare those histories?

The dynamics are slightly different. You know, the vast majority of South Africans are Black. So, historically, the majority of people were being denied by a white minority. In America, of course, the balance of race is different. But, I think what’s happening in America at the moment in terms of interrogating institutional racism, that links into human rights. And perhaps it’s a bigger question of whether at the end of the civil rights movement in America, people didn’t really take it in. In South Africa, when apartheid ended, we had the truth reconciliation commission, but the atrocities of apartheid had been so pronounced, and so present, that we had to take an absolute approach to interrogating it.

Films like ‘Platoon’ and ‘Beau Travail’ have also used armed conflict as a space to explore queerness. What is it about the military and homoeroticism?

I was actually trying to avoid homoeroticism in this film, because I didn’t want it to be discarded at that level. I didn’t want the film to be misread. Maybe I have my own judgement of films that get lost in that layer. I really wanted everyone to connect with the psychological elements of these characters’ experiences. I remember having a panicked conversation with the costume designer during prep, where he was showing me the references for their outfits – the shorts, particularly. And he was going: this is what men’s shorts look like in the ‘80s, across the world. It was very bizarre to me to realise that men of the ‘80s wore the shortest of shorts.

And it was a time where men were just not sexualized, you know, the average man just walked around the world in what today would be considered to be too short. And so, it’s kind of unavoidable: like, you put them in the shorts, you put them in army boots, and you get them to play volleyball in the sun. And it just reads on that level, you kind of have to accept that. On top of that, I had the idea of doing something with slow motion. So, what you’ve got is sweaty young men in shorts in the sun playing volleyball.

I think you do well to avoid superficiality. It’s not just, “let’s look at these hot guys doing hot things.” Perhaps not homoeroticism, then, so much as queer repression. Nicholas’ experiences bring out his queerness, in a way.

You know, I spoke to a lot of men who are gay who had gone through conscription. There were always different points of view on what the experience was for them. A lot of them found it terrorising to be in a room full of other men, in the showers, or to live in close quarters with them. There was this great fear of your sexuality becoming overt, in a way.

I think this military process, particularly as an artistic setting, was about stripping you of any kind of individuality – everyone just conforming and being the same and having the same attitudes and the same sexuality, the same political views. There were also others – like our production designer, who was in the army at the time – who found the space, the military, and the experience to be quite sexually liberating. And I think [the production designer] had one of the best times of his life.

Your next film is a Kurosawa adaptation…

I try to avoid thinking about it that way. [Laughs.]

I think of it as like: Mr. Ishiguro has asked me to direct a film, and in the background, that film happens to be an existing Kurosawa film. It’s Ishiguro’s meditation on the original Kurosawa. So by having that distance between myself and Kurosawa I feel a lot safer, because I can actually talk to Ishiguro, he can encourage me, and I can feel better about myself.

Even when I was asked to make Moffie, my first response was “no,” because it just seemed too far away from me: having to make a film about the trauma of white South African men during apartheid. It just seemed like the wrong film for me to make about apartheid, because I had not made a film about apartheid before then. I appreciated the experience of just leaning into the absolute fear of connecting with something that, at the surface, seems so far away. And I’ve just gone with that impulse here. I think the challenge with making Living, regardless of the adaptation aspect of it, is the challenge of making a film about death.

Has shooting been impacted by Covid?

No, we haven’t started. Our lead is Bill Nighy so we’ve always been conscious that we wanted to start shooting when Bill was vaccinated and felt safe. So, we’re still in that process. We’re also waiting for the weather. We’re shooting in the summer.

Moffie will be in theaters and on demand from IFC Films on April 9. 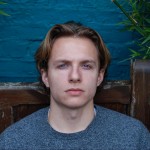 Jack is British film journalist, exhibitor and screenwriter. He currently resides in South East London but spends at least an hour per day wishing he was in the Italian Riviera – and no, not just because he watched Call Me By Your Name twenty-six times, thank you very much. He has attended all of the major festivals other than Venice but he’s hoping to knock that off later this year. He sees himself much like his film taste: unashamedly queer and far tackier than he’d like to admit. When not writing the next great indie flick, or sat in a barely-lit art house auditorium, he can typically be found in a gay bar ranting about Ronald Reagan.