The entire heart-rending story of Kornél Mundruczó’s newest feature, Pieces of a Woman, can be deciphered in Martha (Vanessa Kirby)’s fingers – their gestures and touch. Despite being an immensely personal story for the Hungarian director and his partner Kata Wéber, the film owes its striking tactility to the main actors’ rendition of a couple falling apart after the death of their newborn child. Together with (or rather apart from) her himbo husband Sean (Shia LaBeouf), Martha tackles the tragic aftermath of a home birth, eventually pursuing legal action against the midwife (Molly Parker). The mother, whose motherhood was cut short, is a woman in control of her multifaceted life. Firstly, of her career – she assertively places her hands on the desk with demands, then of her love life – by gently caressing her spouse’s naked back. Finally, control is evident in her polished look, as the camera frames in close ups her perfectly done black nails and their tight grip on the sheets while she’s in labour. However, as the couple spirals down into a depressive dissolution to reveal they were never fit to stay together, Martha’s nails chip away, their black brilliance giving away to scratched, tarnished leftovers of their former elegant blackness.

Those delicate hands that were anticipating to hold her daughter’s head while breastfeeding, now patch up Martha’s lactating breasts, when the film accompanies her in anxious social situations where the unspoken death of her baby lingers all too prominently. While its opening overtly expressed the shared intimacy of a couple in a single, intensely choreographed half-hour long take, the rest of the film makes use of a string of associations and markers of grief. For example, a passing figure of a small girl recalls trauma as easily as a slipped sentence of a conversation about raising children. On the other hand, apples provide a rather metaphorical depiction of what’s lost, when Martha is consistently shown buying or eating the shiny red fruit, as well as making attempts at growing some from the seed. “She smelled like apples”, her voice cracks in a sincere confession, holding together the sentimental power of an otherwise overused (from the  Biblical tradition) symbol.

The chemistry between Kirby and LaBeouf is combustible and doesn’t fail to inflame both their fights and their shared tears in equal measure. Martha is a proudly vulnerable protagonist and it makes perfect sense to fit with LaBeouf as a secondary character, especially since casting him as an emasculated side-liner is not an obvious choice. However, the gender dynamics at play are handled masterfully by both, but there’s no doubt the film belongs to Kirby and Kirby alone.

Pieces of a Woman is Mundruczó’s most direct and accomplished work to date, English-language and star-studded (with a fresh cameo by Benny Safdie), a springboard for the Hungarian director, whose previous film Jupiter’s Moon opened to mixed reviews in the main competition of Cannes 2017. For the scission between private and public life in their new film is far removed from the political and ethical implications of their previous collaborations but Pieces of a Woman benefits from approaching its challenging themes from the periphery inwards – as a wandering touch that can toughen and become firm, as the hold on intimacy slipping away.

This review is from the 77th Venice International Film Festival. It currently has no US distribution.

Savina Petkova is a Bulgarian freelance film critic based in London. Her bylines include MUBI Notebook, photogenie, Electric Ghost Magazine, Girls On Tops and Screen Queens. 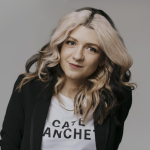