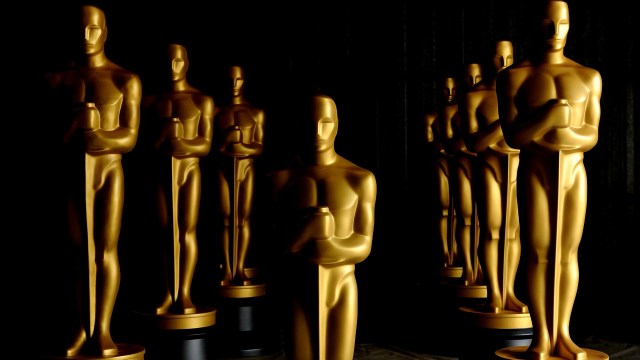 This is it. The FINAL nomination predictions from the Gold Rush Gang for the 87th Academy Awards. It’s been a heated race, full of controversy, late bloomers and early frontrunners. Who will wind up with the highest nomination count – Birdman? The Grand Budapest Hotel? Who will surprise with shocking snubs – The Imitation Game? How will Selma fare in this race is going to be one of the most interesting elements of the nominations, I think. With a campaign that was hit with nasty controversies of historical inaccuracies (while things like American Sniper and The Imitation Game didn’t) to the ‘Selma screener issue’ that kept it from getting any guild nominations to build a sense of momentum or urgency, if it gets any above the line nominations I have to feel like it’s a triumph.

The Best Actor race is probably the most heated in decades. While Eddie Redmayne (The Theory of Everything), Michael Keaton (Birdman) and Benedict Cumberbatch (The Imitation Game) feel safe that only leaves two spots for no less than four (or possibly five) actors to fight for. Bradley Cooper (American Sniper), Jake Gyllenhaal (Nightcrawler), Ralph Fiennes (The Grand Budapest Hotel) and David Oyelowo (Selma) are all on the cusp of a nomination right now. Cooper is benefitting from his film performing strong at the later guilds and the box office, Gyllenhaal has hit every single precursor (BFCA, SAG, GG, BAFTA), Fiennes has hit them all save SAG and Oyelowo, despite only making it into the Globes could really come from behind if AMPAS actually watched Selma. Steve Carell (Foxcatcher), who managed SAG and Globe nods (and a BAFTA nom in supporting) is still in contention but on the outside. Or is he? The yo-yo of Foxcatcher‘s awards run has been a bit of a mystery. On paper, Gyllenhaal looks like a lock; he’s got everything. But as we’ve seen in recent years that’s not enough anymore. You need to passion votes. Does he have enough for a film and character so dark? Nightcrawler has way over-performed this Oscar season but it’s going to take some across the board support for him to make it in. Some have been toying with the idea of Cumberbatch being the surprise snub tomorrow but with a race this close there won’t really be a ‘surprise’ snub and it won’t be just one person.

Best Actress is another great race, despite the dearth of contenders. Jennifer Aniston (Cake) has had an excellent run of precursors (all but BAFTA, for which it was ineligible) and one of the best grassroots campaigns in decades. But then there’s Amy Adams (Big Eyes). If anyone is able to overcome a lack of precursors it’s this 5-time Oscar nominee. Her BAFTA mention put her right in the mix for that 5th spot and it’s going to be a squeaker.

The two supporting categories both have frontrunners so strong in J.K. Simmons (Whiplash) and Patricia Arquette (Boyhood) that everyone else will just have to be happy to nominated. Each category, like so many others, seem to have four pretty solid contenders and then a few battle angling for that 5th spot. In Supporting Actor we’re looking at the SAG lineup of Simmons, Edward Norton (Birdman), Ethan Hawke (Boyhood) and Mark Ruffalo (Foxcatcher) and Robert Duvall (The Judge) to be the most likely, but with Josh Brolin (Inherent Vice) and Tom Wilkinson (Selma) looking for an upset. Duvall is in the strongest position with his precursor haul of BFCA, SAG and GG. This year, SAG and the Globes went 5/5 in this category but will Oscar follow suit? They just don’t go 5/5 all that often. Someone is going to miss out here. Or maybe this category is just that bleak. In Supporting Actress, the 5th spot could go to Jessica Chastain (A Most Violent Year) who comes in with a Globe nod or Rene Russo (Nightcrawler) who makes a splash with a very surprising BAFTA mention. As a two-time Oscar nominee it would seem that Chastain has the edge but Russo is in a film that is possibly getting other nominations, including Best Actor and Best Picture. The same cannot be said about Chastain, who would likely be her film’s only nomination.

So, without any further ado I give you the Gold Rush Gang’s predictions for the 87th Academy Awards nominations in full below. 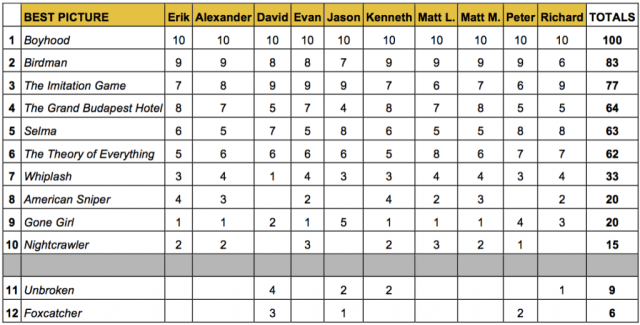 Tyler Doster September 9, 2022
2022 Emmy Predictions: Limited Series categories will be a showdown between ‘Dopesick’ and ‘The White Lotus’

2022 Emmy Predictions: Limited Series categories will be a showdown between ‘Dopesick’ and ‘The White Lotus’

Erik Anderson September 27, 2022
‘Blonde’ cinematographer Chayse Irvin on deconstructing Marilyn Monroe, art vs. consumption and having to say no to Beyoncé

‘Blonde’ cinematographer Chayse Irvin on deconstructing Marilyn Monroe, art vs. consumption and having to say no to Beyoncé

Adam Solomons September 27, 2022
Interview: David Farrier on the five-year challenge of ‘Mister Organ,’ obsession and madness, and having to change his locks

Interview: David Farrier on the five-year challenge of ‘Mister Organ,’ obsession and madness, and having to change his locks

‘The Swimmers’ review: Sally El Hosaini’s drama is a harrowing true tale of survival and dreams [B+] | Zurich