So early, still so many predictions of the ‘good on paper’ variety but that isn’t stopping us from looking at what is or might be drawing buzz towards the march to Oscar next season.

Kathryn Bigelow’s (still) Untitled Detroit Riots Project remains in the top spot from our first predictions, and by a decent margin. Whether it’s being seen as a potential comeback narrative for the first and only female Best Director Oscar winner after her Zero Dark Thirty snub or that the film highlights a dark period of police violence in the past that echoes current times (or both), both the film and Bigelow lead the Best Picture and Best Director predictions right now. The film is an Annapurna Pictures production and they are also distributing the film. It is set for release in August.

Just behind at #2 is Alexander Payne’s Downsizing (he’s also at #2 in Director). The film was supposed to test screen this week but was oddly canceled the day of that screening. More tinkering for a test screening? Isn’t that what a test screening is for? Either way, the very Oscar-friendly Payne’s high-concept film about a man (played by Matt Damon) who literally shrinks himself down to four inches in order to help save the planet and life a loftier lifestyle could either be Honey, I Shrunk the Kids or a great social satire. The Annapurna Pictures production is set for release by Paramount Pictures on December 22nd.

Wonderstruck could finally be Todd Haynes’s golden ticket to Oscar. After fellow auteurs like Paul Thomas Anderson, Gus van Sant, Darren Aronofsky, and Richard Linklater found Oscar cred, it seemed that Haynes would join them with 2015’s Carol but that was not to be. With the PG-rated, family-friendly Wonderstruck (from the author of the 5-time Oscar winner Hugo), he might have landed the mainstream project to get him there.  The story is another high-concept tale, about a boy in the Midwest and a girl in New York City from 50 years ago, told simultaneously. It stars Michelle Williams and Haynes staple Julianne Moore. It’s set for release from Amazon Studios but without a release date so far. Watch for it to debut at either Cannes or NYFF before a fall release.

The big Oscar news this week was the announcement that Steven Spielberg’s collaboration with Meryl Streep and Tom Hanks on the Pentagon Papers film The Post would be fast-tracked for release this year, dropping it right into Oscar season. This pushed off production of The Kidnapping of Edgardo Mortara, which had been high on most of our lists. The news sent predictions into a frenzy, adding it as a top 5 contender in Picture, Director, Actress, Actor and Original Screenplay. Unsurprisingly, Streep usurps Judi Dench’s brief stint at #1 with what could be another Oscar-winning role for her. Inevitably, as new cast members are announced, we’ll probably find at least one slot for supporting actor filled from the film. The film is a co-production of Amblin Entertainment, Dreamworks, and Pascal Pictures (as in Amy Pascal, formerly of Sony Pictures) and will be distributed by 20th Century Fox. No release date yet.

The announcement of The Post bumped Christopher Nolan’s WWII pic Dunkirk down to #6 but the war film still stands as Nolan’s best shot for a director nomination, something that has eluded him for over a decade. Despite being a triple Oscar-nominee – two for writing, one for Best Picture, and multiple Best Director nominations from the Golden Globes, the DGA and BAFTA, he’s never locked in Oscar for his directing efforts. Something as classic as a WWII drama could (should?) be his key to that nomination. Two things either stand in the way of that – or help him; the film was recently given a PG-13 rating and its a prime summer release (July 21st). That could give the perception that, like most of his films, it will be a box office success but not necessarily an awards one. We’re still keen on it being his ticket; he’s at #6 on our Best Director chart but by the oh so slimmest of margins.

Joe Wright’s Darkest Hour, about Winston Churchill’s charge against Adolf Hitler in the early days of WWII, like Dunkirk, is prime Oscar fodder. Gary Oldman’s Churchill will probably remain the #1 prediction this entire season, he’s just one of those ‘locks.’ The film is at #4 right now and Wright himself is at #5 in Director. The period production is also likely to score a wealth of technical nominations like Production Design and Costume Design, plus potential supporting nominations for Emmy-winner Ben Mendelsohn and Oscar-nominee Kristen Scott Thomas. It will also feature John Hurt in one of his last films before his death earlier this year (another possible supporting nominee). Focus Features will distribute the film and has already given it a prime Thanksgiving release date.

Focus Features also has Paul Thomas Anderson’s as of yet untitled 1950s fashion drama and while it’s still assumed to be a 2017 release, Focus Features has had trouble recently balancing multiple Oscar campaigns for its films, sometimes letting one or more fall by the wayside. It’s also a co-production of Annapurna Pictures, which already has Bigelow’s project and Alexander Payne’s Downsizing. It’s still possible the film, starring 3-time Oscar winner Daniel Day-Lewis, gets pushed to 2018 so it’s a bit of a wait and see.

All eyes are going to be on A24 this year after its brilliant Best Picture upset at this year’s Oscars with Moonlight. The indie studio has really blown up over the last couple of years, earning box office and Oscar success along the way. This year the studio has an extraordinary slate of films once again, including the new film from Oscar-nominee Yorgos Lanthimos (The Killing of a Sacred Deer with Colin Farrell and Nicole Kidman), the new John Cameron Mitchell (How to Talk to Girls at Parties, also with Kidman), Woodshock (which could be Kirsten Dunst’s awards shot), and Under the Silver Lake (huge buzz here) just to name a few. We think their ticket this year is going to be Lean on Pete from Andrew Haigh (45 Years, Weekend, HBO’s Looking). The story of an orphaned teenager on a search for his aunt with an old race horse by his side feels like potentially broad-reaching critical, box office and awards success. Veteran actor and Emmy winner Steve Buscemi could land his first Oscar nomination for the film, playing is prime Oscar material, especially in the supporting category. The Film4 co-production is currently without a release date but don’t be surprised if it follows Moonlight‘s model of hitting Telluride then an early fall slot.

When a lot of people counted The Weinstein Company out of last season’s Oscar race, Harvey came back roaring with Lion which earned six Oscar nominations and two BAFTA wins. This year, TWC’s main horse will be The Current War, starring Oscar nominees Benedict Cumberbatch and Michael Shannon and Thomas Edison and George Westinghouse (respectively) in the race for creating a sustainable system of electricity for American homes, could be prime period piece Oscar bait. Or, voters could see that there are already quite a few of those on their plate. Still, it’s never smart to count Harvey out.

Finally, there’s Mudbound. This is a tough one for most of us. After her breakthrough with Pariah, Dee Rees gave us HBO’s Bessie, which earned her Emmy nominations for her writing and directing. For Mudbound, her first feature since her 2011 debut, Rees stands on the precipice of possibly being the first African-American woman (and openly gay) nominated for the Best Director Oscar and you have history following this year’s historic Best Picture win. It’s another WWII era film but a very different point of view and place than Dunkirk or Darkest Hour. Mudbound takes place after the war as two men (one black, one white) return home to Mississippi to face deep-seeded racism. The cast features potentially Oscar-caliber performances from Garrett Hedlund, Jason Mitchell, and singer Mary J. Blige. The caveat, and it’s a big one, is Netflix. The streaming service paid a massive $12.5M for the Sundance hit but has yet to properly capitalize on becoming a feature film distributor the way its main competitor Amazon Studios has. Netflix was poised to make history in 2015 with Beasts of No Nation but the day-and-date release model proved to be not to the Academy’s liking and the film, which was a SAG winner for Idris Elba and nominee for its cast, wound up with nothing on Oscar nomination morning. Amazon, on the other hand, found itself with three wins this year – two for Manchester by the Sea and one for The Salesman. Amazon used a traditional theatrical rollout before becoming available to home video and streaming and if Netflix wants its films to be competitive for the Oscars they’re going to need to change their model.

Erik Anderson June 17, 2021
Will Ferrell and Paul Rudd analyze this in first trailer for ‘The Shrink Next Door’ from Apple TV+ 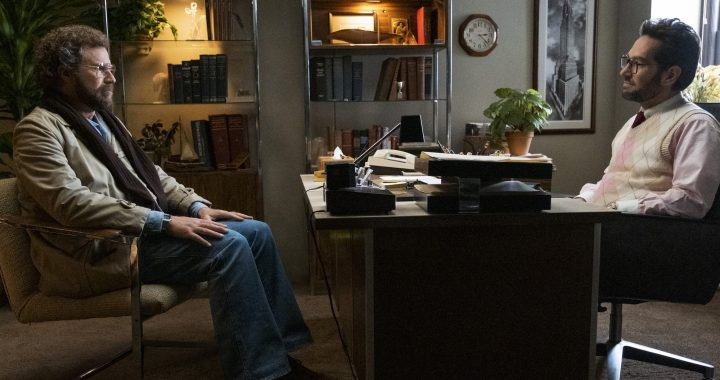