Mayor Pete follows former Indiana Mayor Pete Buttigieg on his epic journey to become the youngest and first openly LQBTQ President of the United States. Director Jesse Moss offers audiences a glimpse behind-the-scenes of Pete’s historic campaign and intimate access to the relationship and support system between him and his husband, Chasten.

The Boys State director said Buttigieg’s story was interesting to him because he knew that the current secretary of transportation was an “up-and-coming star.” Moss went on to admit that the former being Mayor of South Bend, Indiana was not necessarily a “launchpad into national political life,” but that Buttigieg “caught his eye” nonetheless. Buttigieg was an outside Democratic candidate in group of twenty, yet he showed willingness to let the filmmaker follow him throughout the process, and the opportunity was just too “enticing” for this documentarian to pass up. Then Pete’s campaign took off. “It was like a streaking comet, and we got to hold on,” Moss elucidated.

Moss goes on to discuss the all-access granted to him by Pete and his husband Chasten and the Gay Chorus Deep South producer attributes this trust to the fact that Pete could see that his was a documentary storyteller with “integrity.” Moss said he also made it clear that he was not there to “promote his campaign.” But rather, be a “patient and compassionate storyteller.” Moss also attribute’s the former military officer’s willingness to allow him all-access to the fact that the “stakes were so low” when Pete and Chasten first agreed to the project.

After the he conceded from the 2020 race to support current President Joe Biden, Secretary Pete Buttigieg became the first openly gay cabinet member in United States history as the new Secretary of Transportation.

At a recent press day, AwardsWatch was able to speak with Moss about the challenges he faced making this documentary, and how he received unprecedented access to one of the most historic presidential campaigns in US history.

Mayor Pete is now available to stream on Amazon Prime Video. Watch the full interview below. 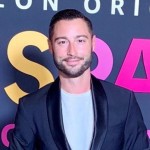 Landon Johnson is a writer and a film and marketing guru. Through his six-year career in media marketing and development, he has worked in New York, Los Angeles, and Hong Kong for a variety of entertainment companies. He can quote every line from Wes Craven’s “Scream,” and is a voting member of the Screen Actors Guild who has served on numerous awards nominating committees for both film and TV. When he’s not binge-watching independent films, he has a real passion for promoting untold stories portrayed on film that have a lasting impact on audiences.