A Knight’s Tale was my first theatrical surprise. My mother dragged me to the multiplex in late May of 2001, kicking and screaming all the way. I hadn’t seen a trailer for the film, only TV spots promising some sort of romantic comedy with a vague air of early 2000s medieval violence. At 10 years old, I had no interest, particularly because Shrek played just down the hall. I was in for an animated fantasy film, thank you, not the live-action adult movie my mother wanted to see, starring the heartthrob from 10 Things I Hate About You.

Funny as it may seem to older critics, especially ones who panned A Knight’s Tale upon release, this experience irrevocably expanded my world of film. It showed me firsthand that my previous judgements based on marketing should never be fully trusted. And any film, no matter my perceived interest or lack thereof, can completely surprise me. Maybe even win me over with an entire genre I had written off because of my previous experiences with other films.

Again, it’s an odd thing to say about such a seemingly inconsequential movie about a squire who disguises himself as a knight so he can win jousting tournaments. It’s the ultimate “fake it until you make it” sports movie, except with the twist of being set in 12th Century France. Or at least a halfway modernized version of the time period set to the tune of diegetic Queen songs and jokes about Nike trademarks. Over the years, critics have found plenty reason to poke holes in the many anachronisms utilized here by director and screenwriter Brian Helgeland, some of which haven’t aged as gracefully as the film’s true strength: Heath Ledger and his band of joyously raucous friends.

Much has been made about the stories surrounding the actual film, rather than the story the film is actually trying to tell on its own terms. There’s the embarrassing controversy where Columbia used a fake critic to juice up the film’s lagging critical reception. There was a backlash to how the marketing made A Knight’s Tale look like a romantic action movie with a glut of rock n’ roll needle drops, and though those needle drops do find their way into the final product, the film as a whole only really uses this aesthetic as atmosphere. It’s the backdrop to a surprisingly straightforward rags-to-riches adventure that takes itself seriously when appropriate, in between the steady stream of jokes and one-liners, of course.

This is probably why audiences responded so favorably to the film in spite of the middling reviews. While some people might have felt a little tricked by what they ended up seeing, the bright side is that the movie they actually got is still entertaining without all the gimmicks to make it more accessible. And it doesn’t take long to get hooked into the vibe Helgeland is really going for, which is helpful considering the film’s long running time of just over two hours. For an epic adventure movie, that’s not very long, but for a comedy? Well, there’s a reason Helgeland tries to balance the genres against a solid foundation, where unlike traditional comedies in the stage sense, where a central character outside of cultural norms gradually learns to be accepted, A Knight’s Tale positions the lead as a dramatic hero, where he pushes out of the boundaries his world is inflicting upon him and the people he cares about.

The movie opens with some expositional text laying out the basics of where we’re at in history, particularly as it relates to the popularity of jousting, plus some light set up for the opening scene. From there, the movie wastes absolutely no time cutting to the chase of what this “tale” is all about. A peasant squire named William (Heath Ledger) sees an opportunity to pose as a knight in the middle of a jousting match, right after his aging master of 12 years dies offscreen from the second round. His fellow squires, Roland (Mark Addy) and Wat (Alan Tudyk), reluctantly go along with his scheme, only because they haven’t eaten in days and see no other option.

Without having to explain a word of William’s backstory — which the film certainly gets into eventually — you can clearly see the twinkle in the hero’s eye. This is the moment he’s been waiting for. With a devilish smile, he shrugs off Roland’s concerns of getting caught, and the movie kicks off in earnest with Queen’s “We Will Rock You,” a powerful, simple, and effective opening number set against the tournament crowd that accomplishes several key goals.

First, it quickly establishes the film’s anachronistic tone, which will go on to define the rest of the movie, so the audience knows right away that this is a heightened, more laid-back take on the era, where even the music is diegetic. It’s also not a direct adaptation of “The Knight’s Tale” from Geoffrey Chaucer’s The Canterbury Tales, nor is it trying to lift much of anything at all from that plot. Just Chaucer himself a few scenes later, portrayed by Paul Bettany in one of his most lasting, affecting performances to date.

Second, the opening sequence nails what English Literature teachers all across the world can only dream of pulling off. It connects the audience directly with a time period they otherwise wouldn’t understand or appreciate. By framing jousting as a sports event with rock music, dancing groupies, and people in the arena wearing face paint, it properly instructs the audience on how overwhelmingly excited people are to gather for these tournaments. It’s essential in selling why William would see jousting as his only possible chance at “changing his stars” and achieving this world’s version of fame and prestige. He won’t get it by fighting in a war. He’ll get it by performing in more ways than one.

The rest of the movie is just as precise and intentional as this illustrative, opening scene. There are certainly stakes — William will hang if he gets caught — but we know the point of the movie is seeing how he’ll overcome these obstacles and revel in his expected successes. Which is probably why the film feels so fresh all these years later. It relies on the standard hero’s journey, as it collects new companions like Chaucer and a widowed blacksmith named Kate (Laura Fraser) at a steady rate, and we’re quickly introduced to William’s chief rival, Count Adhemar (Rufus Sewell).

But it blends all these familiar adventure tropes with the sensibility of a romantic comedy. The film gives a lot of time and energy to building up a believable and investing courtship between William and his “princess” love interest, Jocelyn (Shannyn Sossamon). She’s written as a Gen X in her 20s who finds herself living in exactly the wrong time period (so, yes, a live-action Meg from Hercules), and it’s a surprisingly solid match against Ledger’s clumsier, cute-faced performance as a guy completely out of his league both on his horse and off. But like the film’s second-act group project in composing a love poem proves out, William can do just about anything with the help of his friends.

It’s the baseline principle of a good, swashbuckling ensemble story blending perfectly with the will-they won’t-they of a rom-com. In the same way Helgeland finds common ground between rock ballads and medieval jousting, he simultaneously strikes a winning balance with these disparate genres. And the result is a movie that feels entirely like its own thing. One that might’ve rubbed critics the wrong way because of its shoddy presentation in some parts, as well its scrappy risk-taking. But that’s sort of the point. You can see Helgeland on the page, setting out to make a movie quite unlike anything he’d been tasked with before and maybe even “changing his stars” as a director and screenwriter known for dark dramas like L.A. Confidential. He arguably overcame his imposter syndrome to produce a funny, timeless anthem for a new wave of moviegoers who now see modernized takes on seemingly stuffy period pieces as a given, and we’re all the better for it.

A Knight’s Tale was originally released on May 11, 2001 from Columbia Pictures. It is currently available to stream on Hulu with a subscription as well as rental on Amazon and YouTube. 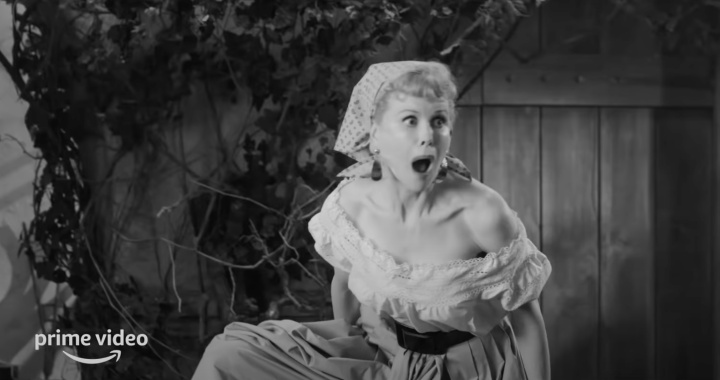