There are monsters, and then there are monsters! Here, on this fertile, bounteous planet, the monsters take a combative stance against the earth that gave them life, twisting and mutating that life into monstrous form and turning that stance against one another. It’s a jungle out here, and it’s of our own making – Mother Nature’s original jungle she may reclaim in time, should we fail to turn toward one another once more in benevolence and compassion.

Alejandro Landes does not explicitly query how the characters in his abstract, alternative war movie Monos got to this point, though you might. Is it an alternate reality, or a reality yet to become real? Is his startling vision a figurative one, as suggested by the little absurdities and surreal touches liberally sprinkled throughout, or a literal one, as inferred in a decisive third-act swing toward narrative development, fleshing out an initially odd, unclear premise with identifiable details? Your guess is as good as mine, and as worthless – Monos is compelling cinema on its own terms, the only terms it needs satisfy. It’s an ambitious, innovative work of daring artistry, and its finest qualities ring out loudest when it’s content to give them their own, defined space. Broaden those borders, blur those lines and it all starts to mean very little at all.

You see, there’s not much substance to Landes’ vision, and his attempts to draw some in feel forced, sourcing dissatisfying solutions to problems the movie never seemed to possess. The intrusion of plot, of clear forward motion into Monos‘ hermetic world disrupts its casually quirky, wholly distinctive spell, where each individual oddity had seemed to cohere into a marvellous whole of wonder and artistic invention. Primarily, the inadequacy of such conventional storytelling concerns is engendered by their essential ephemerality – in contrast, Monos is first and foremost driven by the style that forms precisely the substance it finally lacks, because substance is its most integral feature. There’s a tremendous physicality to this movie, a sumptuous tactility, and its enamoured obsession with sensation in turn feeds the integrity of the premise, diverting attention away from sense and reason that its innately senseless, unreasonable developments may bear their peculiar, mysterious demeanour.

As with many young filmmakers striving to be noticed on the independent scene, Landes is a tad too aggressive with asserting his personal directorial style, but there’s no denying the quality of work coursing through his movie. Jasper Wolf’s dazzling cinematography embraces a seemingly unlimited range of colour across various environments. Mica Levi’s score proves her peerless ability to render internal thoughts and emotions as outward musical expression, and the overall soundscape is deliciously rich in strange, beguiling features. Editing produces a distinct unpredictability that befits the meandering, shape-shifting plot quite nicely. And the cast of actors, mostly young performers making their debuts, is excellent, committing admirably to the unusual demands of Landes’ design. They’re asked to go to monstrous lengths here, and for vague, questionable purposes, but this level of excellence from cast and crew alike is worth a watch nonetheless.

This review is from the 2019 BFI London Film Festival. 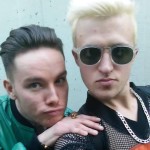